An exciting three days of activities, October 3 – 5, is on schedule to celebrate the life and accomplishments of Gordon Parks.

Showing of the film The Learning Tree in the Gordon Parks Museum.

“Sarah, Ella, and Bessie: The Mothers of Gordon Parks” presented by John Mason, Associate Professor, Associate Chair, and University of Virginia Department of History. Three women, all of them mothers, played crucial roles in Gordon Parks’ life. His own mother, Sarah Parks, profoundly shaped his character. Ella Watson, who resembled Sarah in many ways, was the subject of his first great photograph. Bessie Fontanelle, like Sarah and Ella, was the glue which held her family together and was the center around which one of his finest photo-essays revolved.

“A Night of Jazz” featuring, Queen Bey (Kansas City’s Ambassador of Jazz) along with a social hour of heavy hors d’oeuvres and cash bar available.

“Behind The Learning Tree” reunion with some of the The Learning Tree cast members: Karole Graham, Stephen Perry and S. Pearl Sharp, along with David Parks, photographer, film director and author, film crew and extras along with panel discussion and presentations.

“Gordon Parks Projects Presentation” by students from the Gordon Parks High School in St. Paul, MN. They will share some of their latest work and projects about Gordon Parks.

“From The Czar of Black Hollywood to the Oscars: Fiction and Filmmaking from Kansas”, a presentation by Shayna Israel, Project on the History of Black Writing/Department of English, University of Kansas and Danyelle M. Greene, Film and Media Studies, University of Kansas. The presentation will focus on three major Kansas filmmakers: Oscar Micheaux (Great Bend) Gordon Parks (Ft. Scott), and Kevin Wilmott (Junction City), comparing and contrasting the contributions of three groundbreaking authors and filmmakers in three different eras of American cultural history.

Click for full schedule of events and registration information. 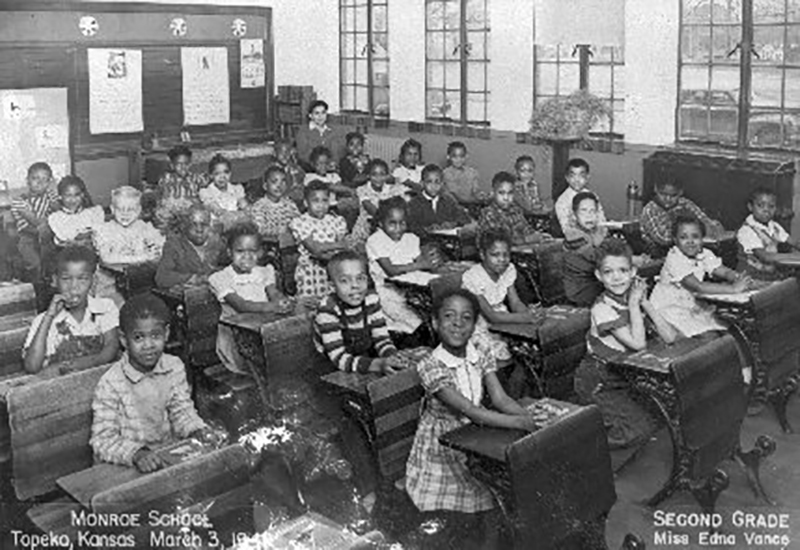 The conference — expected to draw 250 travel planners from across the nation — will take place from April 14-16 at the Capitol Plaza Hotel, 1717 S.W. Topeka Blvd., Visit Topeka Inc. announced in a news release Friday.

Cappuzzello said the deciding factor in the AATC’s decision to come to Topeka was the presence of Monroe School, 1515 S.E. Monroe, which was the centerpiece of the 1954 Brown v. Board of Education Supreme Court decision that ended school segregation, and the Ritchie House at 1116 S.E. Madison, which was part of the Underground Railroad.

“Topeka’s heritage tourism is as rich as any other city when it comes to the significant impact it has had on the world,” said Brett Oetting, president of Visit Topeka. “As we continue to put focus on our heritage tourism attractions and programs, this conference will be a catalyst to drive travel to our community.”

The AATC is an association of 2,500 travel planners serving the African American community, according to its website.

“Travel Industry of America reports that the African American community travels twice as often on a group package tour as the population as a whole, and we at AATC act as the source between these travel planners and the travel industry,” that site said.

Visit Topeka, which promotes Topeka as a tourism destination, announced in Friday’s release that it had signed the contract arranging for the AATC to hold next year’s conference in Topeka.

Cappuzello said, “The Visit Topeka sales team and the Capitol Plaza Hotel impressed us during the site visit, along with their Midwest hospitality, convincing us that Topeka will step up to this opportunity to showcase all that it has to offer our members.”

Topekans should be proud of Friday’s announcement, which is “another indicator that our community is on the right path,” said Mike Bell, vice president of Visit Topeka, who worked with Cappuzzello on the bid.

“People from around the country are taking notice in what we have to offer here,” he said.

Thanks to our talented and wonderful supporters at KWCH, these vignettes are now appearing regularly in our community and on the KWCH family of stations. Check them out:

The History Trail tells the story of the African American contributions to Kansas at it’s various historical sites, chronicling the people, places, and events that created this rich history. It is a shared history of all Kansans that is all … “About the Journey.”